When planning your big day, there are so many Jewish wedding traditions to keep in mind. Here's a quick-and-easy guide to everything you need to know about, from wedding venues to dancing and food! 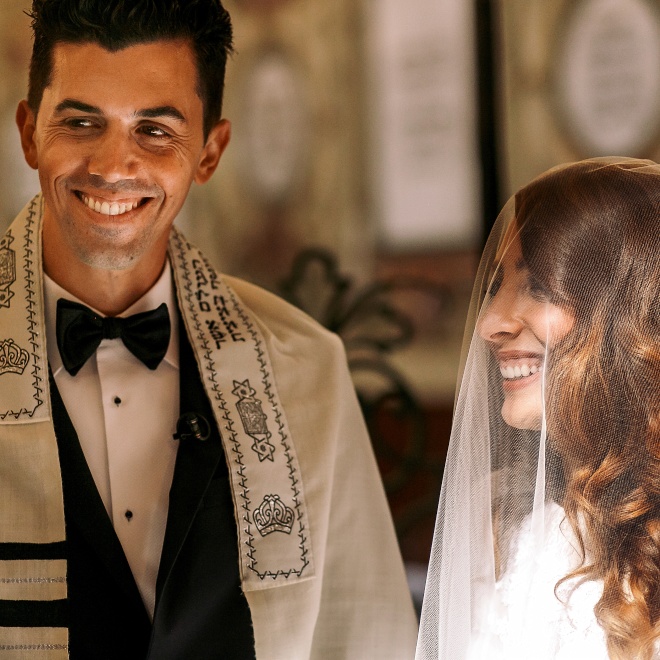 It doesn't matter how much or how little you've been around Jewish traditions, you might want to squeeze some into your big day. You may or may not follow these traditions depending on your subculture (Ashkenazi or Sephardic), your level of orthodoxy, and whether you're marrying a Jew.

Don't forget to talk to a rabbi or another wedding officiant to figure out what will work best for you, your family, and your spouse. 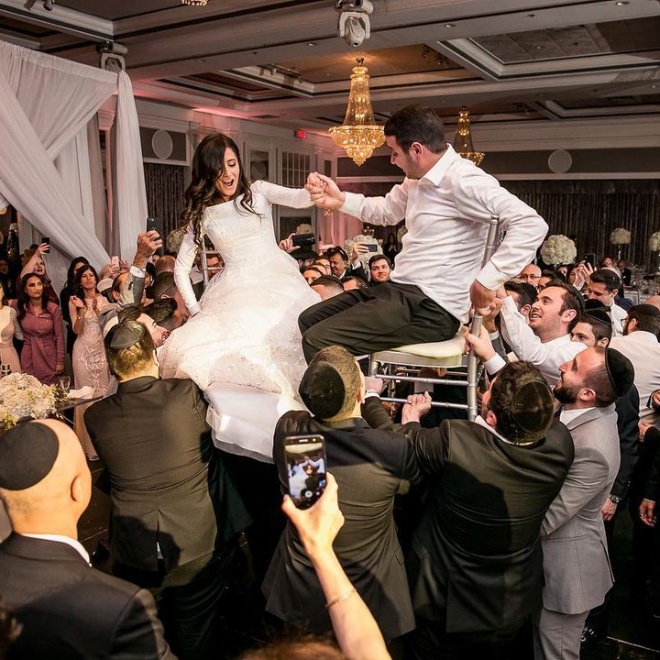 In Yiddish, Aufruf means "call up". Before the wedding, the bride and groom go to the Torah for a blessing called an aliyah. A custom after the aliyah is to toss candy at the couple called misheberach to wish them a sweet future, just like confetti in traditional Christian weddings.

Some Jewish couples fast on the day of their wedding, depending on the Jewish community they belong to. It's to atone for sins, just like Yom Kippur. After the ceremony, they can eat again.

In the past, a ketubah (marriage contract) protected the bride's rights and was hers. In today's ketubot (plural of ketubah), the text expresses the couple's commitment to care for each other and to build a Jewish home together.

The Jewish tradition of signing the ketubah dates back two thousand years. Each of the people involved in the ceremony signs the ketubah first, including the couple, officiants, and witnesses. 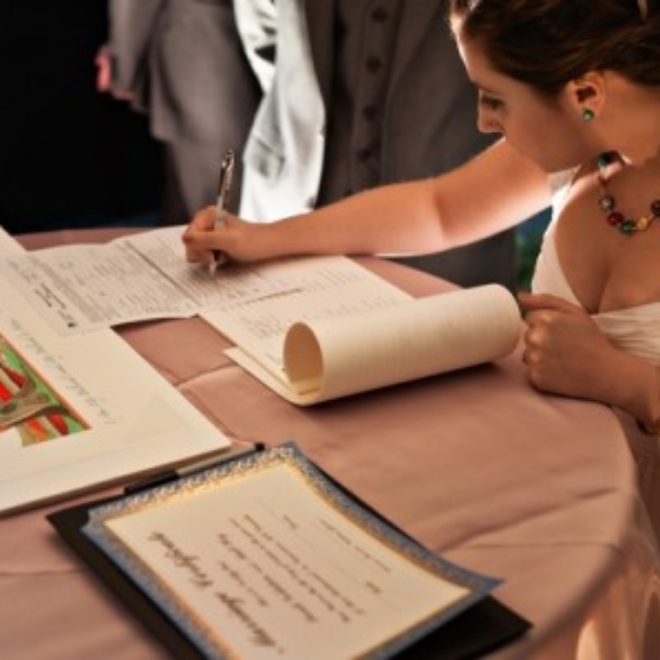 If you're interested in learning about other old wedding traditions, check out this article: A Look at 41 Unique Wedding Traditions Around the World

Bedeken is the veiling the groom gives to the bride during the ketubah signing. First, he looks at her, then he covers her face. In this way, he shows his love for her inner beauty, and also that they are still two different people even after they are married.

The tradition comes from the Bible, in which Jacob was tricked into marrying the sister of the woman he loved because she was veiled. Such trickery won't work if the groom does the veiling himself.

There's no Jewish wedding without a chuppah. This canopy is made up of a cloth that's attached to four poles, which can either stand on their own or be held by wedding party members. Chuppahs can be simple or elaborate, depending on what the couple and their families want. 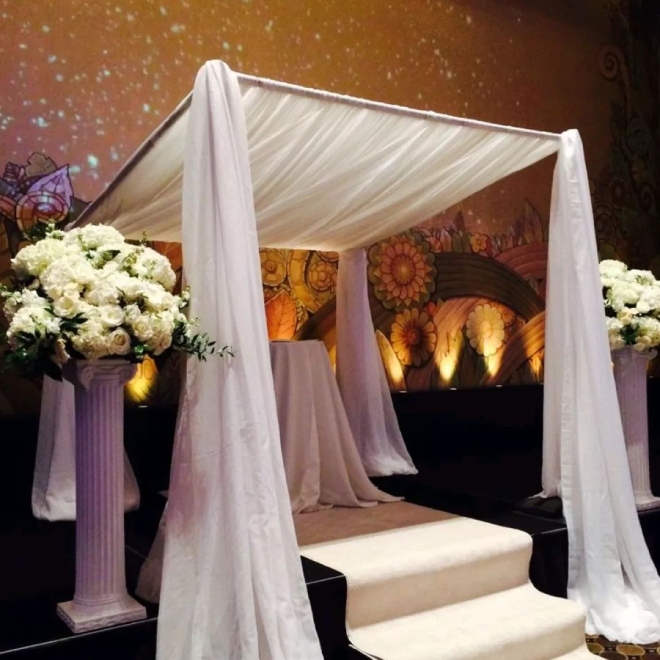 Here are the types of wedding tents and canopies explained: The Ultimate Guide to Planning a Tent Wedding

At a Jewish wedding ceremony, there are two cups of wine. Rabbis recite betrothal blessings over the first cup. When the blessings are done, the couple drinks from it. Blessings express the couple's commitment to creating a Jewish home that's dedicated to God and to the well-being of the world. 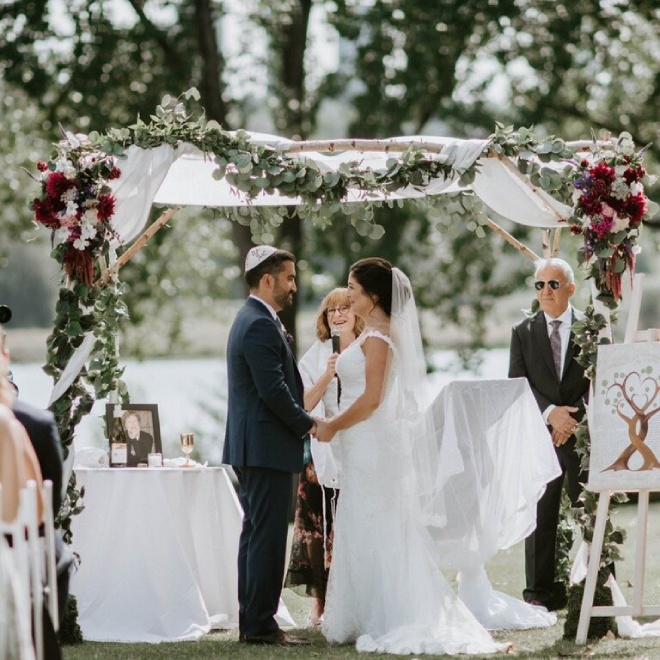 Under the chuppah, the bride circles around her groom three or seven times in Ashkenazi tradition. Some people think it's for protection against evil spirits, temptation, and other women's glances. Others think it's symbolic of the couple starting a family.

8- Giving of the Ring

A Jewish marriage is considered official when the groom gives the bride an object of value, usually a ring. In the same way that you hope the marriage will be one of simple beauty, the ring should be entirely plain without stones or markings. 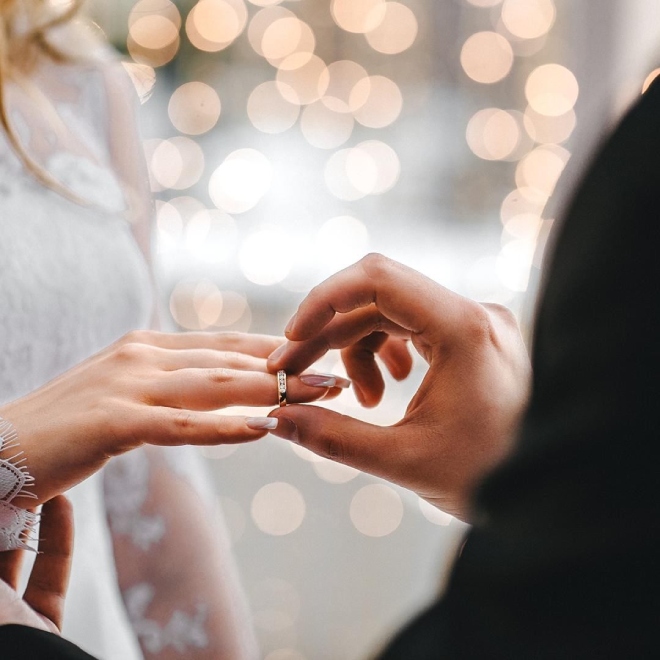 9- Reading of the Ketubah

During the ceremony, the ketubah is read out loud so that all can hear the promise the couple made to one another. Sephardic Jews don't typically read the whole document; they only read a few lines at the beginning and end. 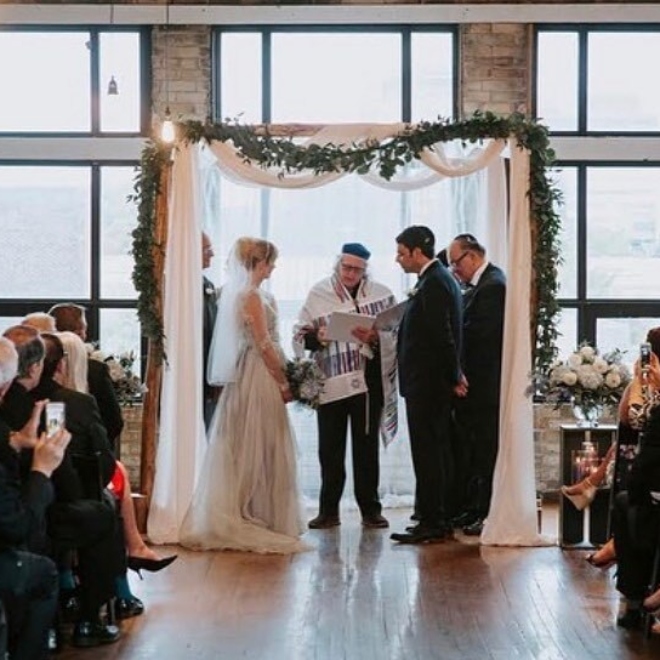 The tallit, which is a fringed prayer shawl, can be used in a variety of ways during Jewish weddings. Often, brides give their grooms tallits as wedding gifts. You can also use a tallit as the cloth part of the chuppah. The couple's parents can wrap the tallit around their shoulders during the final blessings to symbolize being surrounded by love. 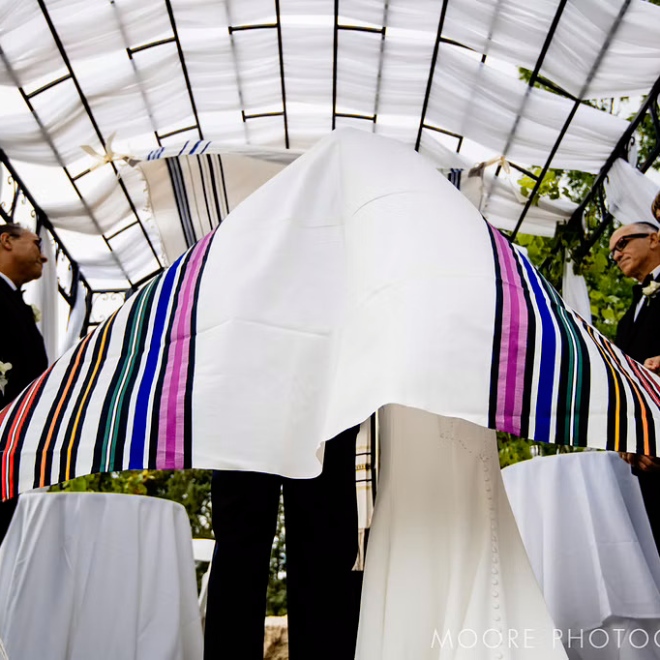 We've got more unity ceremony ideas here: Everything You Need to Know About a Wedding Ceremony

11- Breaking of the Glass

At the end of the ceremony, there is a tradition for one, or sometimes both, members of the couple to break a glass. This ritual can be interpreted in lots of ways.

Some say it's a reminder of the Temple in Jerusalem being destroyed in the first century because even in the middle of joy, we can't forget the tragedies people have had to endure. Others say the fragile glass represents marriage, which needs to be cherished and taken care of. 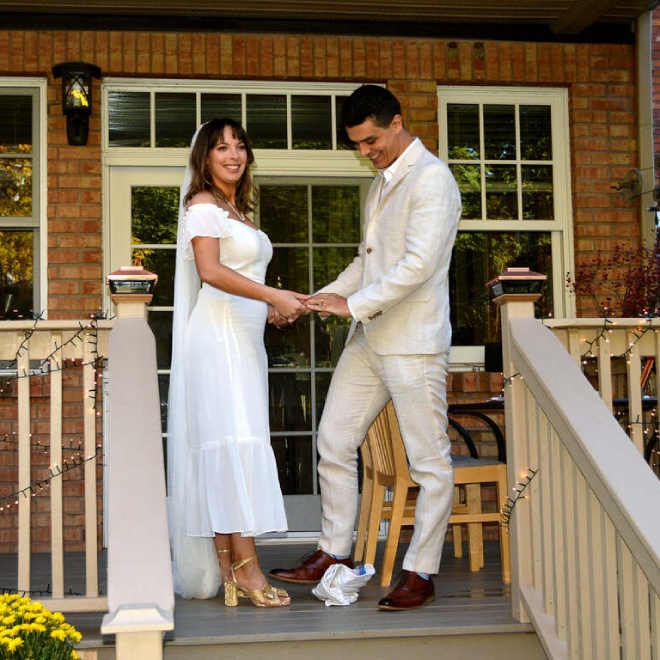 Jews love to shout "Mazel tov!" at weddings. Immediately after the ceremony is over and the glass is broken, you'll hear the guests cheer "Mazel tov!". Mazel tov means "good luck" and "congratulations".

The direct translation is actually closer to wishing someone or some people good fortune and a great future. Weddings are the best time to say "mazel tov"!

The couple will spend their first moments together as a married couple in a private room after the ceremony, called yichud, which means "togetherness." Ashkenazi Jews practice this, but Sephardic Jews don't.

The hora is a celebratory dance at the reception where guests dance in a circle. Most often, you'll see men dancing with men and women dancing with women. Couples sit on chairs and hold onto a napkin or handkerchief while being lifted into the air. Lastly, there's a special dance called the mezinke for the parents of the bride or groom when their last kid gets married. 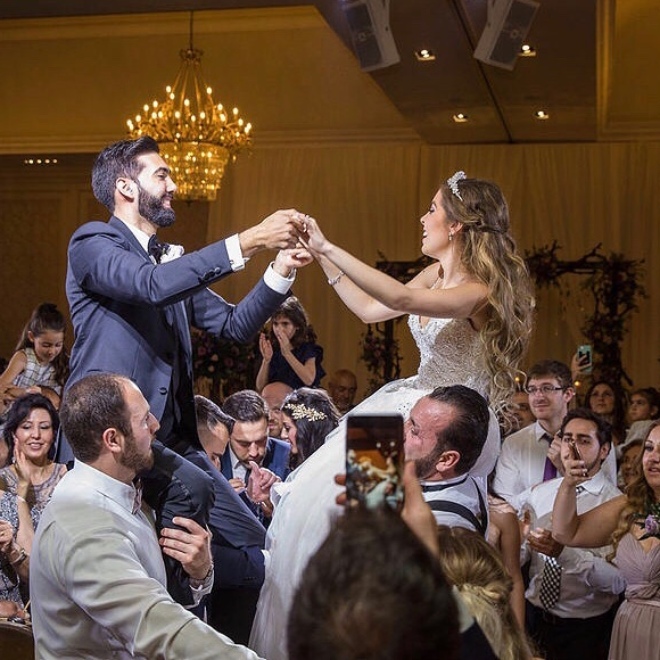 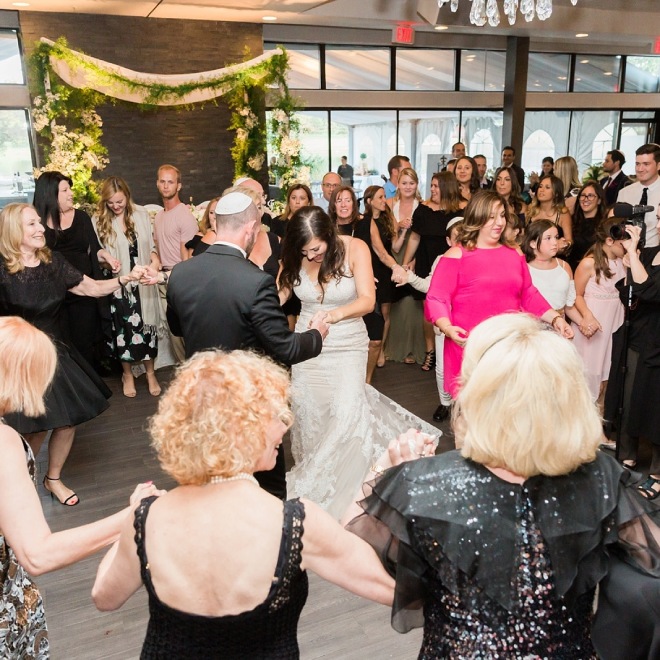 That's all we have to say about Jewish wedding traditions. On WeddingHero, you can find the best wedding venues in your area and get quotes for free. Don't forget to check out all the other wedding vendors!

Most elegant wedding venues suitable for every budget are here!

Thousands of couples find the vendors they are looking for on WeddingHero. Join them!

What's in this article?

Click to reach other articles in Wedding Venue category!

Micro Wedding - What Is It and How to Plan Yours

These 23 Wedding Themes Will Suit Any Style